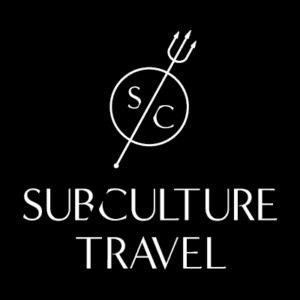 Subculture LLC began as Got Muck LLC in 2010, formed by Kerri Bingham and Hergen Spalink.

Kerri and Hergen met while working in diving in the US Virgin Islands in 2005 and moved to Indonesia in 2006.

After managing a live aboard from 2006 to 2009, traversing the Archipelago and diving some of the country’s most remote regions, they spent 3 years managing the dive center for Lembeh Resort in the Lembeh Strait.

While still at Lembeh Resort, they founded Got Muck LLC to coincide with their move to arranging and leading group travel throughout the world’s best dive regions.

In 2012 they moved to Bali where they started Bali Agung Solusi PT, a destination management company for Indonesia with a focus on the dive industry, with their longtime friend Agung Wiraputra.  Kerri and Hergen stayed in Indonesia full-time until 2017 when they moved to Portland, Oregon with their Bali dog Chewie.

Once Got Muck was relocated to Oregon, the scope of the company expanded which necessitated a new name to match the new mission – Subculture.

Today, Subculture, in addition to being the exclusive north American representative for leading adventure travel providers in Indonesia also provides assistance with arranging domestic Indonesian travel and tour logistics via Bali Agung Solusi and still runs several group trips every year to some of the worlds best dive destinations as Got Muck Exclusive Group Expeditions.

Hergen and Kerri are both experienced underwater and topside image makers and Nauticam Ambassadors.  Their images have been featured in many prominent publications and Hergen is co-author of the Lynda.com course on Underwater Photography with Deke McClelland.